April 28, 2017
We playtested our first of several mutli War Band games over the past two weeks. These games will be large scenarios that will appear in the rulebook. Our largest game had four War Bands per side. This game had over eighty figures on the board and had Canoes, Shamans and Spirit Creatures involved. It was a very involved game. We had to re work the scenario and played it a couple of times. It was played on a large size table, 48" x 60", but probably could of fit on a bit smaller size set up. We also had to rework the canoe rules to make them more playable. It seems that canoes, although perhaps realistic, moved too slowly to be very playable in the game. We have therefore

This is what the Board Set up looked like. A small river which runs through a swamp and empties into a lake. The Defending War Bands had three War Bands on shore waiting by the edge of the lake in the red area. Thefourth War Band entered in canoes in the corner which is also marked in red. The attacker could bring his four War Bands in anywhere along the black table edge (marked in the picture). The defending War Bands had to link up with the Canoes, which are laden with goods returning from Kebec. The group was to then portage the Canoes to a point above the falls (seen at the left edge of the picture in white) and continue on home by putting the canoes in the stream. The stream is considered plugged up at the swamp and war bands in this area will portage along the shore to the portage point above the falls. 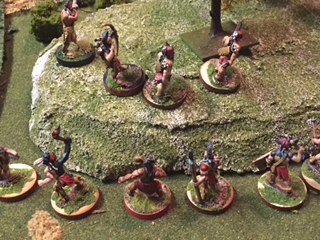 As the defender I brought my warriors up to a defensive line behind the hill which overlooked the river. This allowed me a good view with my bowmen while leaving my warriors behind the hill in cover where they could not be sniped at with bow fire from the opponent. The attackers were slowed slightly by having to cross the river and I let them push forward onto my position while I waited for the canoes to land and be portaged thru behind my position.

You can just see my second War Band in the bottom of the above picture moving to block the gap. I used the Ambush Action often in this game. I was able to interrupt the opponents charge by saving my moves and replying with a charge of my own from an attitude of Ambush. This was important to the game because the combat cards are slanted in favour of the attacker in the game design. We found this action, "Ambush" (page 12 - the fourth action in the beta playtest rules .pdf), to be too much of an advantage and not fitting with the intent of the game, so we have had to change the rule so that you can only take up an "Ambush pose" if you are not spotted. 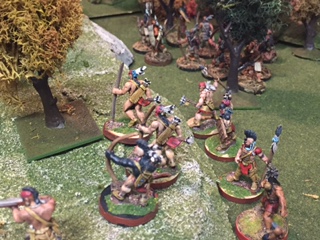 The attacker pushed onto the board and then forward across the river while sending one War Band upstream to act as a blocking force to sweep in from the flank and keep the canoes away from the waterfall portage point. The attacker stood out in front and traded bow fire and "Shining Wood" fire for several turns while trying to gain an advantage and waiting for the blocking force to get into position.

We also had three shamans per side in this game and the defender made better use of his Shaman's. One Shaman had the ability "Orenda Thief" (Shaman abilities are not in the beta playtest rules that we have released but will be in the new rules). The Orenda Thief thru the other shamans into a panic when he stole Orenda markers from them. During the game I managed to summon a level 5 Water Oki and move one Great Warrior with a "Flies like the Owl" spell. We also had the Flying Head show up as a Medicine Card result and another shaman turn himself into "Wolf Form". Although this was alot of Orenda to have in one game we were trying to playtest these rules so it was important and good that these things showed up in the game. We have also done a considerable amount of work on the Summon Oki aspect of the Orenda rules and added two new spells to the Orenda sheet that Shamans can perform. These are all great additions if you want to use these aspects of the mythology in your games, but you can certainly play the game without it as well.


As the battle reached a critical stage I was able to shoot my opponents by using an Ambush Action as they attempted to charge my War Band. The Shining Wood was reloaded and available and killed a warrior outright before the charge could even be closed. The War Bearer then turned the Matchlock around and used the weapon as a club in the forthcoming melee. 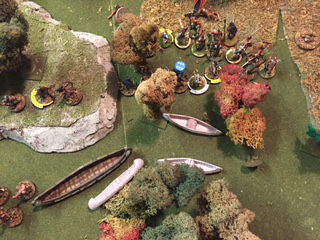 This picture is taken towards the end of the game. My canoes have portaged to the point where they can join up with my other War Bands and they bearers have dropped them to join in the fight with the other War Bands to make the final push towards the falls. This game ended in an overwhelming victory for the Defending War Bands as they were able to maul the attacking War Bands considerably. The point total was 205 Furs to 45 Furs with the Defenders taking a decisive victory.
It turned out to be a good experience playing a large Multi War Band game. We worked on alot of rules and made some important tweaks to the game.

Popular posts from this blog 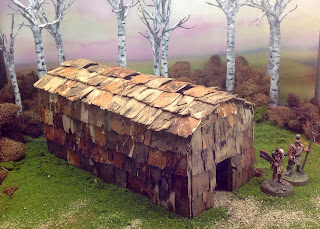 The Iroquois (Haudenosaunee or "People of the Longhouses") and the aboriginal Huron built and inhabited longhouses. These were sometimes more than 100 m (330 ft) in length and generally around 5 to 7 m (16 to 23 ft) wide. The walls were made of hundred of saplings, sharpened and fire hardened, and driven into the ground close together. Bark, with a staple being birch bark, was then woven horizontally through the lines of saplings to shield the families from the weather. Horizontal poles were then used to brace the walls up. The roof was placed on top of these walls by bending saplings, resulting in an arc-shaped roof. Leaves and grasses covered this frame providing a roof structure. This structure was then covered by bark that was sewn in place and layered as shingles, and reinforced by light swag. The Longhouse had doors at each end of the structure which were covered with an animal hide to keep out the cold and the weather. Doors could also be inserted in the s
Read more

Yet Another Painting Guide for Flint and Feather Miniatures 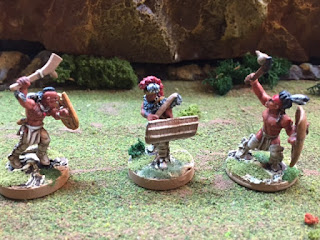 Kirk has been helping us with the playtesting of the Campaign Rules which we concluded last night and moved on to try a few Multi-player games before we wrap up the playtest portion of our project. As part of the playing Kirk was inspired to paint some miniatures. He used the Accessory packs for his miniatures so many have been altered from their "out of the box" format. Here are his instructions to painting the miniatures.   Painting Instructions for pre-contact Northern Native Indians Items required to paint figures: Paint colors needed – White, red, blue, burnt umber, burnt sienna, medium brown, tan, green, terra cota and Caucasian skin   tone. Eye dropper for water drops into paint. A ceramic   tile for dabbing drops of paint and water. Flat tooth picks for mixing paints and water on the ceramic   tiles. Paint brushes used A # 3,   # 1 and a triple 000 brushes were used   to paint these figures. 1 flat brush 3/8 th to ½ inch wide. Plastic table clo
Read more